Back on the air! I am going to be on wtmx-fm tonight at 7:30pm tonight for the Mix's on air dating show call Mix'n'Match on air dating. The sweet deal is that I am the bachelor that picks one of three girls. Check it out on line at www.wtmx.com and I will report in full post show.
Posted by Mike at 4:39 PM No comments: 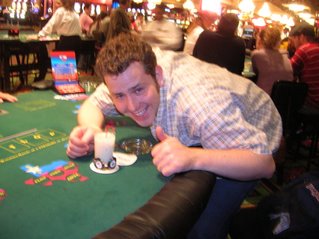 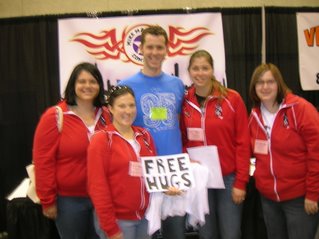 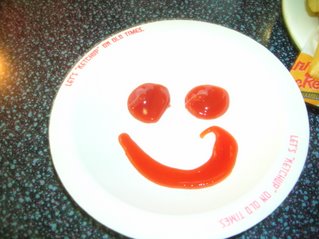 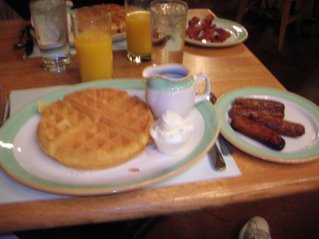 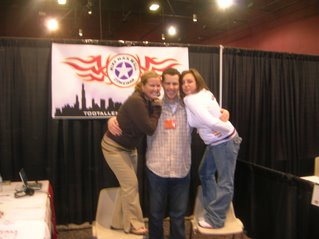 As I was driving around Lake Tahoe the other day, I stopped at a beach. Nice, cold but nice. The trees where huge, and so were the pine cones. I picked one up that was roughly the size of my head (which is large). When I went to put it down I realized extra large pine cones come with an extra large ammount of sap. I was able to wash the sap off in the lake but then had some transfer of sap. I went to make a call on the cell phone, passed sap on to the phone, and then sap to my sideburns. This sap has been on the side of my head like cement for almost four days now. Someone told me to just comb it out. The thought of that pain and bald spot scares me.
Posted by Mike at 12:20 PM No comments:

Taste of the Road

After the past six weeks I have hit three conferences and three states meeting hundreds of students. Arkansas, Illinois and Nevada have given me plenty to talk about and now the blog remembers.

While in Arkansas the conference was tied into one of the finest and rare community events. Duke Days, when Little Rock honors the fine show of "Dukes of Hazard." There were about ten general lee's, boss hog's patrol car and many more. I really look forward to getting back to Arkansas. One major reason Chuch's Chicken.

With all the programs to attend while there I had one half day to recover and I did so with SEC football and a trip to the Church's Chicken. The chicken itself is nothing to boast about, but there is something on the menu that makes life tolerable. Sweet corn nuggets. Now as I lay watching Alabama play football, I became the posterchild of a sloth moment. I actually set the deep fried corn nuggets on my stomach as I watched the game. Equally satisfying and disturbing. It's hard to pinpoint a moment in one's life where you can feel the initial curve on the downward spiral of livelihood. Thank you Church's Chicken.

In Peoria I was lucky enough to hit up two of my favorite places, Arby's and Bob Evan's. Now the only peculiar thing I must say about this Arby's is that it was the most outgoing, friendly, and female Arby's ever. Run by what may very well have been the cheerleading team on a quest for new uniforms. When I was leaving it was like trying the GAP Challenge (entering the store, touch the back wall and leave without being spoken to by an employee.). I was nearly out the door when a firing squad of courtesy sprayed thank yous and farewells. American values, and the best curly fries; you can't beat that.

It is common knowledge that I happened to forget to book my hotel for Peoria. Upon the first night of hanging out I found myself experimenting how well a car stays warm overnight. Four hours of sleep in the rental car gave me plenty of rest until the cold woke me up. (by the way, of all disturbing ways to be woken, cold is definitely a memorable one.) I drove over to the Bob Evans for a quality meal where I sat between the typical male elders in mesh hats discussing the morning commute and pending winter weather. Once I finished I did continue in my luxury stay in the front seat of the rental. The level of class I bring is slightly higher than sleeping four hours behind a Bob Evans. Regardless, I recommend it completely, barring you bought breakfast.

Reno taught me the importance of refridgeration. I ordered a massive ammount of pizza one night and worked on it for the next day and a half. All the toppings were handling well except for the chicken. That stuff goes south in a hurry. The term shelf life is a very misleading one. I was quick to realize that the average time frame for determining shelf life of food is almost always hind sight.

The road is great but there is something to be said about home cooking, you don't need to sleep in a car to enjoy it.
Posted by Mike at 10:11 PM No comments: