From the Bottom of My Wallet

Saturday night I went out to a charity event and had a great time. Well, nearly a great time. I was unable to get any form of food there since they were serving appetizers that only Derek Zoolander would enjoy. Fast forward to the drive home where I realize it's late but I should eat something.

I go into a parking lot for Little Caesar's pizza, it's midnight and they've just closed. The taco stand next door is open. We run inside place an order and while they're cooking it the chefs ask if I've parked on the right side. I reply I think so. Nope. Being in there for less than ten minutes some dude put a boot on my car.

Immediately upon confronting me, he begins to record our conversation probably because people hate call centers and this is a call center guy who can't land the call center job. His job is to remain hidden in a dark parking lot and then when people get out to grab food while the Little Caesar's is closed, boot their car. This man proudly boasted that he can boot a car in 35 seconds. I told him that's almost as fast as I can loose respect for someone.

Of course like any ticket/violation, I try to get out of it. It's mid-night in Chicago and I am wearing a suit. I explain we've just come from a charity event and apologize for taking a space on the "wrong side" of the parking lot. In this era where it seems like everyone gets about a dozen hand outs a year, I was hoping to gain some form of a pardon.

It never happened. So $140 later I had the most expensive burrito in my life. What did I learn? Aside from my attention to detail must be heightened in the late hours? Parking lot attendants have one of the worse career choices ever. Who can honestly go through a day let a lone weeks or years at a job where it's your responsibility to ruin some one's day?

I am going out on a limb here and guessing that the majority of parking lot attendants working night shift/weekends are bitterly processing a break up.
Posted by Mike at 9:32 AM No comments:

WGN-720 AM Interview of Mike Maxwell by Jim St. Augustine

10 years ago I was enjoying my time at Ripon College. I was once invited to be apart of something very special. I was asked to join Ken & Leo's team of perennial champions for indoor soccer. I don't know how I was blessed to be on such a stacked team. We cruised through the regular season to a top seed for the playoffs. As we neared my illusive "Intramural Champion" T-shirt, we suffered a devastating loss in the playoffs. It was brutal. I spent years of trying to balance academics with occasional athletic competition to only come up empty again. Was I destined to be the Karl Malone or Dan Marino or the rec sports world?

Many people like to say "time heals all wounds." It may be a stretch but "forgive, never forget" seemed to transcend more for me on this matter. A decade past and I have to be honest with myself. "At 30 years old, is my recreational sports career over?" How could I explain to my nieces and nephews that there was not much glory in my day, just great sportsmanship?

God sure works in mysterious ways. (Sorry to go Tebow-light on you there.) I caught up about 4 years ago with a friend, Vinny, who was the General Manager youth ministries at a church. After getting drafted (not sure if there were any other calls placed) in the first round for the flag football season, I helped the team to a "prestigious" 2-7 season. We lost a great man (Gabe) to a knee injury mid-season and also a few of the women players suffered season ending injuries/babysitting conflicts. We then ventured into indoor volleyball, where against the odds we finished the season with a respectable record and one playoff win. The off season was draining. Where do we go from here? Are we a team? Will everyone be back? We have the talent but do we have a team?

There was no way we could enter as a pre-season favorite to win it all. No way. Although a few key acquisitions of talented free agents added enough excitement around the league. We played our game, Flying Popes volleyball. That took us to a strong record and a #3 seed in the tourney. We knew it was possible, but it wouldn't come easy. Our playoff run resumed last night. The Flying Popes, in their first Final Four appearance, against the #2 seed, TFC. After, edging them out 2-1 in the match, the Flying Popes felt that perhaps we were on the verge of greatness.

I remained with a tempered enthusiasm. The tragic memory of that misdirected goal 10 years ago on the soccer field was at the front of my mind during the intermission. Sure, there was pressure but only for our opponents. It was like a Robert Redford movie mixed with a Kevin Costner movie topped off with some Gene Hackmanesque moments. There was just too much fate. The Flying Popes diligently took care of business and swept the finals against the Jet Setters.

We won. Champions. I was a champion. After a decade of struggle, I was presented with a black long sleeve shirt that reads "Players Sports Group Champions." I've always wondered what it was like for Jordan to clench the trophy after Game 5 in 1991. I've never been so humbled by such a marvelous thermal shirt.
The ref immediately congratulated us, then at the championship shirt presentation ceremony the questions began to fly. "Are you guys coming back next season?" "Are you going to step up to the B League?" "Where do you go from here?"

Where do we go from here? Where do I go from here? I've just achieved what appears to be a lifelong dream, to be recreationally superior to my peers. What does anyone in the face of triumph do? Reflect.

Will I be back? I don't know. Why not go out on top? How much longer will I have the drive and competitiveness to keep me at the top of my recreational game? I think it's best to say I need time. Time to reflect on these memories forged over this improbable season. Maybe I'll just take the next couple weeks to spend time with my family and friends, hopefully just get back to a normal life. Time to recharge, focus on what Mike needs. It's safe to say, I am proud to be a Flying Pope. I hope to finish my recreational career a Flying Pope. Is that up to me? I'm not sure. I've made some great friends over the years as a Flying Pope and I certainly expect those friendships to long outlast my days in uniform/sweatband. I'd like to think the recreational sports system is not as bottom line driven as it's counterparts but if a tough decision is needed I certainly wouldn't stand in the way of the organization's future.


I certainly won't let this go to my head, that would be ridiculous. No one wants to be around someone who takes them self too seriously. 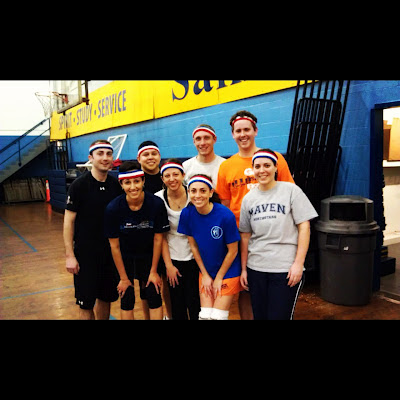 There's that old expression that 'slow and steady wins the race.' Well, that's nice and all but that is a cushion for slow people whose parents or teachers are hoping to God that something else in life distracts them from wasting their life with a 'dream.'

Dreams vary for people of course. Dumb point Mike, what else? I've had some time to get my adult life moving in effort to land some of these 'dreams.' Time passes and then you revise said dreams and end up with goals. These 'goals' are things that typically are less damaging to the ego when you miss out on them, after all, goals are something that hangs over you professionally so personally they can suck an egg if they must.

I've dreamt of someday being in great shape. If I were to get into amazing, toned, muscular shape I could be the epitome of male butter faces. I think that growing up in the Midwest, with my dad reminding me to be realistic, that I aimed right on mark to one day be a butter face. Well, I graduated college, not in shape. Time went by and now I maintain a fitness regimen due the pending rivalry between denim's spacial capacity and my stomach's inclination to never let go of the mass quantities of pizza I eat.

I no longer dream of being a male butter face. I have a goal of one day winning a rec league title. There is something to be said about the struggle between my friends and I against other people our age to gain validation as the most qualified recreational human in a particular sport. I've been on winning teams in gym class, how is this still an obsession of mine? Maybe life would be different if upon completing a memorable run to gym class champions, the teacher/coach let us know it's perfectly fine to not be humble in this moment, the rest of our life will silence us soon enough.
Posted by Mike at 1:34 PM No comments: