I've been inspired by friend & fellow comedian Dale Zawada to use the simple yet direct Rage Maker comic strip template. Dale's 'Adventures in Comedy' is personally one of my favorite things that is done weekly by a comedian. I hope to follow suit with my own comic. "Sounds About Right" is an expression my brother and I would say constantly growing up when life basically punched us in the face. Perhaps, "Sounds About Right" is the rich man's "it is what it is" in regards to surrendering to some absurd B.S. I hope you enjoy it, share it and come back for more personal stories drawn out. 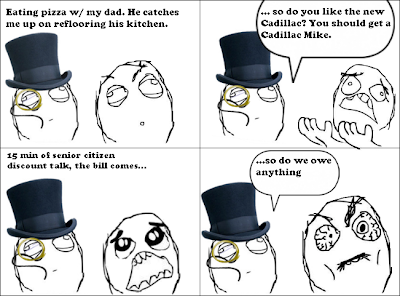 I've worked in Chicago going on three years now. Some of my fondest moments are of helping others in this city. However, let's be honest making the same commute and seeing the same pan-handlers in the same spot for years is an odd social commentary.

The best pan handler out there is the musical pan-handler. Now conventional wisdom says, if one is going to show they're really seriously in need, forgo the string section and hit up the brass or woodwind section. I fear that someday I may be a father and my child will want to have music lessons. No problem as long as they stay away from the saxophone. There seems to be only 2 paths of the saxophone; jam band member or headlining during rush hour on a bridge or under it for that matter.

I walked by a guy jamming the 'Bear down Chicago Bears' song on the sax and it was a nice touch to a long work day. It was getting cold as the sun set but no excuses, he did stumble a bit. Now he's telling us that not only does he need cash, a job, and a warm place to stay, but some lessons wouldn't hurt either. By far, the best musical pan-handler in Chicago is on the Madison Street bridge from about 4-6p. He rocks out on a couple drums. Seeing the state of our economy, I will never judge one's perspective on what qualifies as a legitimate 'investment opportunity.' Odds are his returns will be ten fold to any social security for my generation.

Yesterday I found myself in an odd position. I was cashing a check. I went in to a bank and felt like it was 1997 again. The 'personal bankers' at Chase are pacing around worse than a shady car salesman. As I am endorsing the check I am approached by an elderly woman who rocks my world. 'Can you spare a dollar?' Wait did I just get pan-handled in a bank? In a bank? Either you're oblivious or an innovator. It makes perfect sense to me. Everyone says 'sorry, I don't have any change.' When you ask them right at the ATM what else can we say besides 'I'm sorry I don't have...well I guess I don't care.'
Posted by Mike at 9:21 AM No comments: